The Shrimps Trust is thrilled to announce that Amber Suns are confirmed as post-match entertainment for the Break the Gate/Members’ Day fixture versus Cheltenham Town, taking place on Bank Holiday Easter Monday 22nd April 2019.

Amber Suns are an Electro-Pop band originating from Morecambe and formed in 2017. The recently expanded line up now consists of James Morrison (Keyboard & Vocals), Liam Kohlar (Guitar & Vocals), Rob Hartford (Guitar & Vocals), Tom Mulliner (Bass), and George Ashcroft-Smith (Drums). The band have kindly agreed to play an acoustic set in the Local Choice Suite to commence shortly after the Man of the Match presentation.

After releasing debut single “Free” in late 2017, a main stage headline performance at Morecambe Fireworks Display in front of thousands quickly followed. 2018 turned out to be a phenomenal year for Amber Suns. Second single “How Does She Do It?” was released on 31st March along with a memorable music video featuring costumed dinosaurs on Morecambe beach and Promenade. An appearance on the BBC Introducing Stage at the Highest Point Festival in Lancaster was one of the band’s highlights of the year and was hotly pursued by live performances at the Down By The Riverside Festival in Dolphinholme, and of course Morecambe Carnival in August.

A third single “Grasp A Part” was launched at The Yorkshire House in Lancaster on 2nd November, along with an accompanying official music video produced by Joe Tomlinson.

This song is really very special to the band, as it is the first track that they all collaborated on since becoming a five-piece in February, and has been crucial in helping them shape, and refine the rhythmic style that they have been looking for since the beginning. The band closed out 2018 with a surprise show at The Royal Station Hotel in Carnforth, where they celebrated the year’s many achievements.

So, what does 2019 hold in store for Amber Suns? Well, they have already been back on the gig trail as headliners of Breastival (in aid of Prevent Breast Cancer) at Revolution in Manchester, and they have also played an hour-long acoustic set at Preston Flag Market as part of the Highest Point Festival Bus Tour in association with BBC Music Introducing and Skiddle. The band are now busy putting the finishing touches on their next release, so hopefully, the wait for new material is almost over. Amber Suns truly are “One Of Our Own” so please check them out and give them a follow on their social media channels:

Please come and join us in the Local Choice Suite for this free entry show after the match on Easter Monday, and don’t forget, tickets for this fixture are only £5 for adults (with one under 11 free), £3 for concessions, and £1 for juniors aged 11-18, for all tickets purchased in advance of matchday, in all areas of the ground. 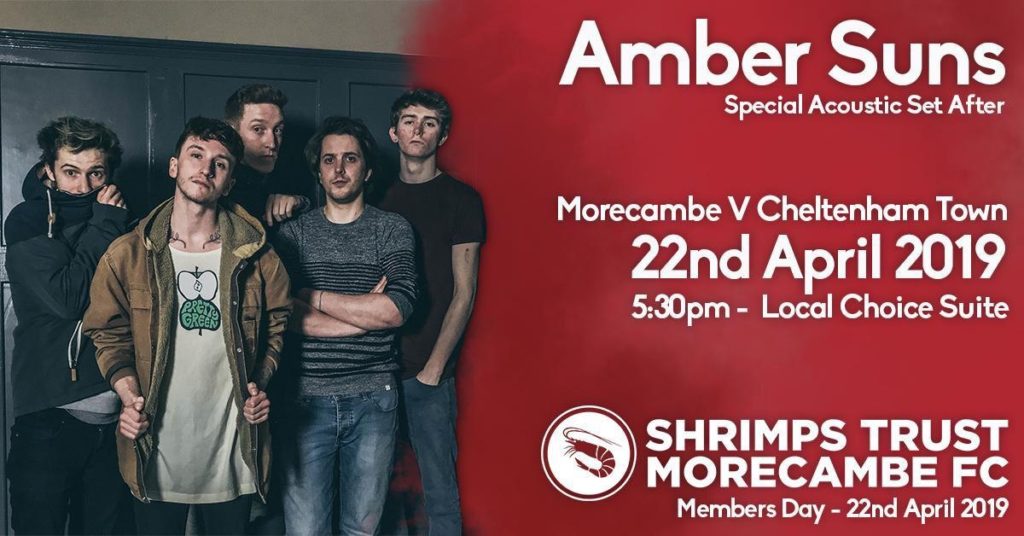